As you know, we were set to begin production on Season 4 of Rap News in February. Well, it’s now the end of February and there’s no episode. So where the hell is it — you rightly ask? Well, tbh we’re asking ourselves the same question. Our rhyme pens were primed, our wigs and costumes were ironed, our browsers were open, with more than enough craziness in the world to get started.

Then, in the middle of February, just last week, something unexpected happened —­ we ran into funding difficulties which prevented us from proceeding as planned. We’re still not exactly sure ourselves what the situation is; so unfortunately we can’t go into details. But we want to let you know that we’re in the process of sorting things out so that we can get back on track ASAP.

We apologise for all the people out there who are suffering from Juice deficiency; to all those who have written to us asking, WTF are you guys up to and where’s my !*^&@ing new episode of Rap News?

Juice Rap News has not disappeared. We have not been renditioned; or abducted by UFOs.* We’re raring to go. We will be dropping an episode in March. And in the coming days, once we know the information ourselves, we’ll provide a less vague update on what’s been happening.

Until then, we thank you for your patience. 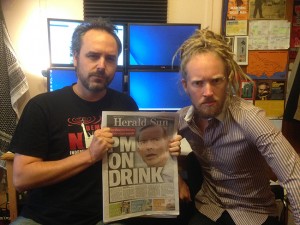